The Prize in the Pages: Brand new books draw droves of students to summer school With a roll of stickers reading “I Earned 2 Free Books This Week”, Evangelisti would visit each classroom and marvel at the number of students proudly pinning their badges of perfect attendance on tank tops and other summer garb.

“All of the kids, K-5, were so excited to receive their sticker,” she said.

Books, that’s what they were really excited for, and it’s where this story starts. The classrooms are full now, but it wasn’t always like this.

For years, Bennington, like most districts throughout the state, labored over dwindling summer school attendance. They tried everything to reward kids for showing up, but summer school doesn’t have the same allure as a day at the College World Series or a week of summer camp or sun-soaked vacation. It probably still doesn’t, but there’s intrigue in the way Bennington has chosen to entice.

“It’s unfortunate people think of summer school as a stigma rather than a continuation for what is good for a child’s academic development,” said Pine Creek Elementary Librarian Denise Klaus, a fourth-grade teacher in the summer. “We get that everybody needs a break. Teachers need a break. Students need a break. But the research shows that kids retain so much more if they stay active during the summer.”

Klaus is known for thinking outside of the box. In fact, she doesn’t feel comfortable inside of it. And she’s admittedly stubborn, so those low attendance numbers summer after summer didn’t sit particularly well with the librarian.

She began to explore.

“When I first started thinking about this project, I had difficulty explaining it, so people were trying to think inside of my box and kind of questioning some of the goofy things I was thinking about,” she remembers.

And then, while listening to author Donalyn Miller speak at the Plum Creek Children’s Literacy Festival in Seward, Klaus experienced her “AHA!” moment.

“She said ‘Students retain more from actually owning books of interest to them than actually attending summer school,’” said Klaus. “I thought ‘Wow, that is powerful. How can I make this happen?’ And it has been the most important thing to me from that moment on.”

Compensation for coming to summer school in the form of brand new books. A truly novel idea, Klaus pitched it to her administration and the Bennington Public Schools Foundation, which offers a grant system to teachers’ ideas, and received $1,500.

“Bennington is a district full of support,” said Evangelisti. “The foundation has been very generous to partially fund this initiative. Each person who has heard about it and the resulting increased attendance has been supportive, encouraging, and curious about what they can do to help make it happen again.”

The Summer Rewards Program instantly led to higher attendance numbers despite a late implementation process, and easily distributed $1,500 in books. 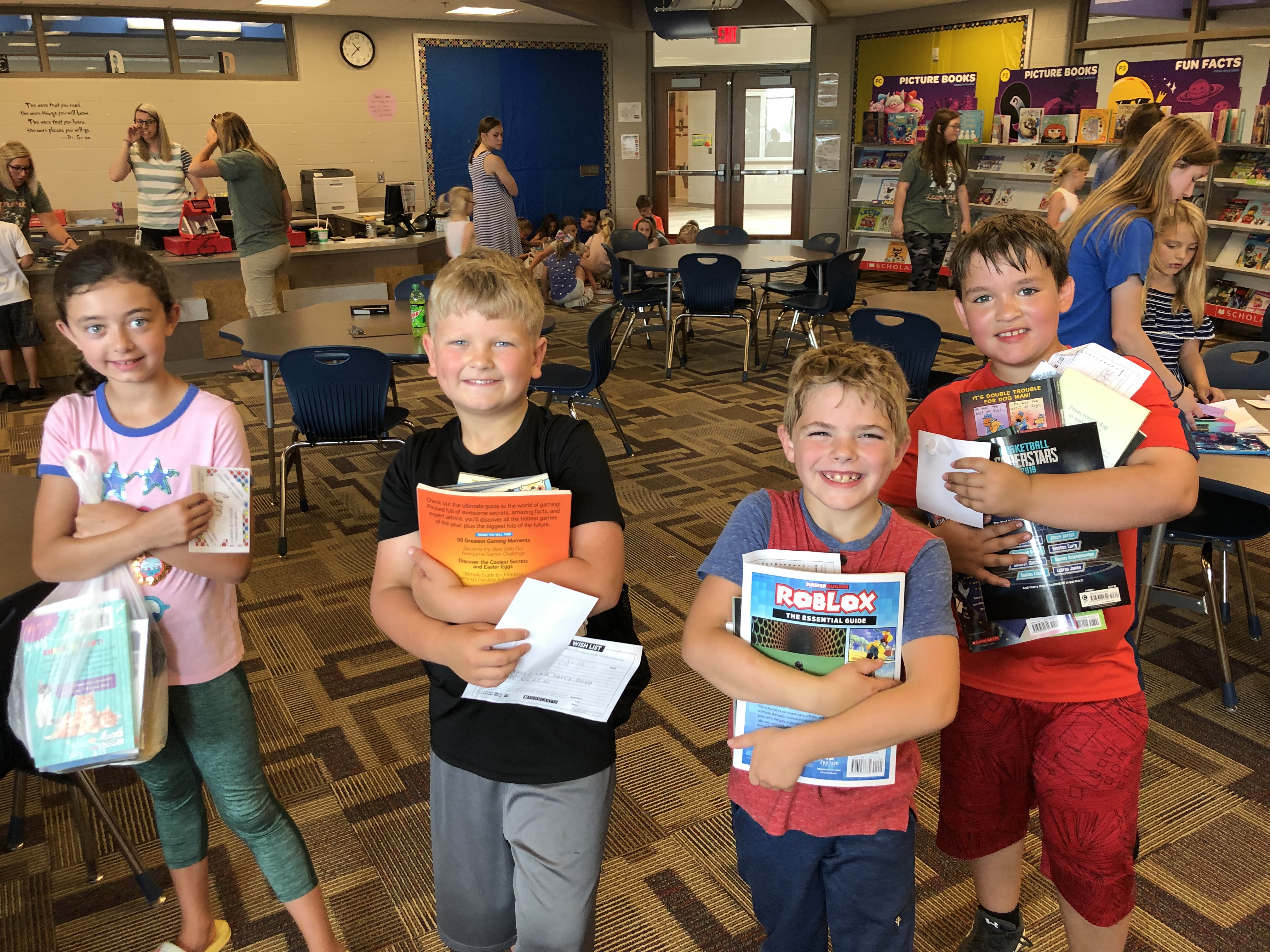 “Response from kids that first year was good, and parents were grateful, but in the back of my mind I knew this wasn’t quite what I wanted it to be,” said Klaus.

Klaus wanted more kids. More books. Bennington is a rapidly expanding community, but there is still a small amount of businesses within city limits. Klaus said she’d stay awake until the early hours of the morning trying to come up with $50 here and $50 there.

“Bennington is a community that gives until its pockets are empty,” she said.

She wrote another grant and began to seek donations from other sources. She bounced ideas off of the foundation and when she asked for money the second year, it was there. Attendance spiked, as did enthusiasm.

This summer, 93 of 143 students recorded perfect attendance and earned eight brand new books to call their own. Many other students went home with six books. In all, the Summer Rewards Program awarded nearly $4,300 worth of books.

Many of the students who went into summer school reluctant readers left it with a new passion.

“It has been so great to see kids fall in love with reading,” said Evangelisti, a reading specialist with BPS. “Watching them work so hard to earn free books and then hearing their disbelief that it could be anything they wanted was wonderful.”

A post survey came back with 81.4 percent of parents indicating the incentive to be “Very Motivating” for their child. When asked if they would participate in summer school next year, six out of six students responded with an “Oh yeah!”. One called the experience “Totally Awesomesauce!”.

For Klaus, who wanted to be a teacher from as early as second-grade, the reward is as simple as seeing a young student buried in a new book, captivated by a story.

“I will do anything to get a book in a kid’s hand,” she said. “When you see the pictures and you see those youngsters smiling in awe while exploring the Scholastic Buy One, Get One Book Fair, and you hear the ‘Oohs!’ and ‘Aahs!’, that’s the best part of what I get to do.”

A love for books has become part of the culture in Bennington. The foundation helped to send 50 students from Pine Creek Elementary to Kids Day at the Plum Creek Literacy Festival last year, where they listened to authors and illustrators. Students from the other Bennington elementary schools will attend this fall’s festival, too.

And Klaus didn’t stop there. On the Thursday before last year’s festival, Plum Creek visited Pine Creek, as author/illustrators Lesa Cline-Ransome and James Ransome stopped by to spend time with students.

“We have original artwork from some of the authors we have seen hanging in the library,” said Klaus. “That’s my favorite time of the year, and it has been so great to share it with the kids here.”

As she watches students fall in love with reading, Evangelisti often comes back to a quote from Mason Cooley.

“Reading gives us someplace to go when we have to stay where we are.”

In Bennington, the prize lives between the pages, where summer adventure awaits.

“I like to think books are always going to be important to kids,” said Klaus. “That’s my hope and dream.”